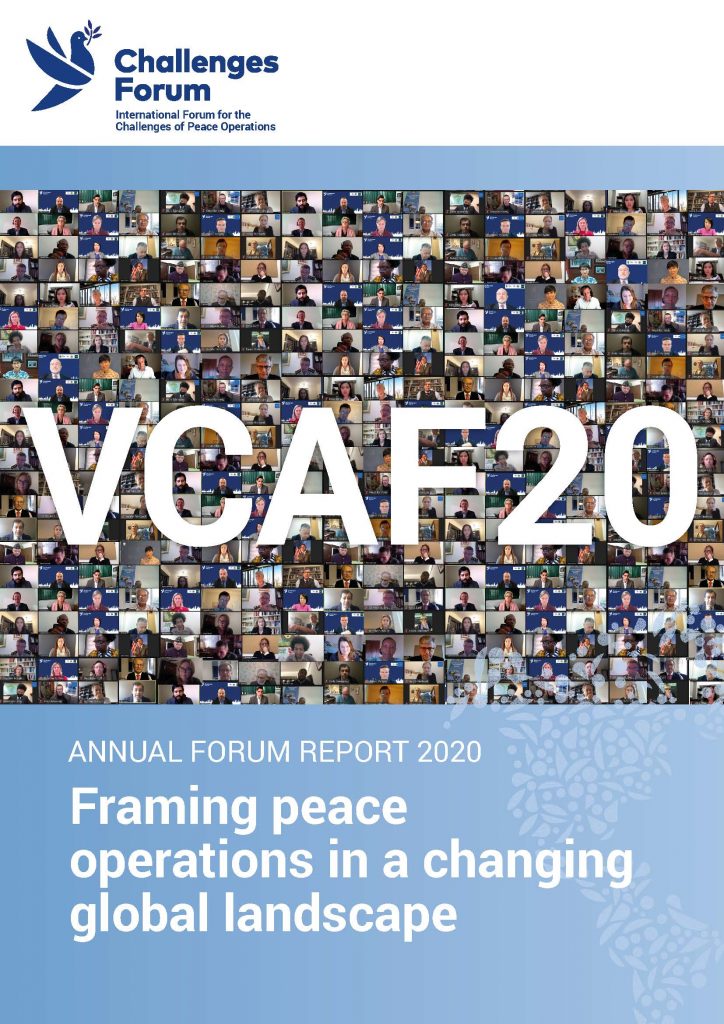 The first virtual Challenges Annual Forum 2020 was held 7–11 December, focusing at ‘Framing Peace Operations in a Changing Global Landscape’. Co-hosted by our Partners ISS in South Africa, the MFA Indonesia and NUPI in Norway.

These key recommendations offer a summary of the discussions that took place at the Annual Forum.

They are grouped under the three cumulative ‘dialogue strands’ as well as the first plenary discussion.

Peace operations are delivered by partnerships. All stakeholders involved in peace operations need to continue to provide political support for missions and coordinate with other actors on the ground to support efforts to build and sustain peace. Key recommendations included:

3. Provide political support for women’s engagement in peace processes. Even when there arequotas for women’s engagement in peace processes, women are not always being meaningfully engaged and given an opportunity to influence such processes. The Security Council and field missions should monitor the implementation of these quotas and ensure that women can participate and influence such processes, including by engaging directly with women involved in the relevant process.

The AU-UN partnership is essential for the delivery of peace operations on the African continent. Yet there is

The AU-UN partnership is essential for the delivery of peace operations on the African continent. Yet there is a need for a much better understanding of the political role and ambitions of the AU, Regional Economic Communities (RECs) of the AU and the UN. There is scope in these partnerships for greater synergies which focus on complementarity, rather than hierarchy. Key recommendations included:

6. Identify joint approaches for conflict prevention and emerging security situations. The UN Security Council and AU Peace and Security Council should meet as early as possible when a situation of concern develops to identify options moving forward. To support such engagement, both organs need encourage synergies that foster a better division of labour at strategic and operational levels, including through better harmonisation of agendas, joint analysis and mission design, and implementation of communiques and decisions.

7. Facilitate secondments and training opportunities between both organisations. The UN Secretariat and AU Commission should explore options for joint training, particularly for senior mission leadership. Secondments could ameliorate the differences in capacities between AU Peace and Security Council and UN Security Council and facilitate mutual understanding of how the two institutions work, their roles and comparative advantages. It could also promote shared views and ensure the presence of a counterpart on “each side of the fence” to move cooperation forward.

9. Enhance entry points on cross-cutting issues. The AU and UN should identify areas where cooperation and collaboration can be further enhanced on different thematic issues, such as gender, youth, and DDR.

10. Utilise the role of the A3 to advance African common positions in the Security Council. The three African members of the Security Council (A3) have a central role in enhancing the relationship between the AU, RECs and UN. Through greater coordination and engagement, they can serve as an informal and influential bridge between the two Councils.

Peace operations need to more comprehensively deliver on efforts to build and sustain peace. For peace operations to become more people-centred, they do not require new mandates or resources, but rather, a shift in mindset at the leadership level, and organisational change. There is also a need for greater system leadership on peacebuilding coordination. Key recommendations included:

11. Identify options to improve engagement with host communities. The Security Council, Secretariat and think tanks should analyse and identify options for how peace operations can better respond and engage with people and communities, in addition to state institutions. This could include informal advisory boards comprised of local community leaders to truly orient missions towards people-centred peacebuilding either at the mission headquarters level or the heads of regional offices level.

13. Build the capacity of youth to influence peacebuilding processes. Senior mission leadership and field missions should identify and focus efforts on building the capacity of youth through community engagement and peacebuilding activities and encourage the UN Security Council to engage with representatives from civil society, including through informal and formal briefings.

14. Foster a national dialogue and good governance initiatives. Peace operations need to harmonise people-centered and state-centered approaches to address growing inequalities. This could take the form of a new social contract or national dialogue between state actors and the local population. The policing component has a particularly important role in fostering engagement between state actors and the local population in their area of operations.

15. Leverage the role of the Peacebuilding Commission. This should include continued briefings by the Chair of the PBC and PBC country-specific configurations to the Security Council where the country is the host of a peace operation. The Security Council should also leverage the advisory role of the Peacebuilding Commission as part of its consultations, including its work in advocating more strongly for gender-responsive peacebuilding. Furthermore, member states sitting on both the PBC and Security Council need to demonstrate greater political coherence in their approach to peacebuilding, and particularly efforts to coordinate the work of both bodies.

Understanding the factors that make peace operations effective is critical to ongoing efforts to strengthen mission performance. It

Understanding the factors that make peace operations effective is critical to ongoing efforts to strengthen mission performance. It can also facilitate ongoing political support for peace operations and their efforts to deliver on peace. Key recommendations included:

17. Strengthen the culture of continuous learning in peace operations. Peace operations continue to evolve and need to be responsive to events and developments that affect their ability to deliver on mission mandates. The Secretariat should strengthen a culture of continuous learning in peace operations, drawing on the work being undertaking as part of CPAS, which has the potential to deliver data and lessons that can assist missions to innovate and try new
approaches.

18. Utilise independent reviews, research, and data to shape mission mandates. In addition to the independent reviews commissioned by the UN Secretary-General, there are a range of research studies and pieces of analysis undertaken by think tanks and researchers which draw directly on engagement with the local communities and peacekeepers in the field. Security Council members should draw on these independent studies and engage in an evidence-based dialogue more regularly to support the drafting of mandates. Field missions and member states should engage with researchers to present on their data and analysis, particularly when there are opportunities to draw on their findings to influence decision-making processes.

19. Share CPAS data with a range of internal and external stakeholders. Field missions and the Secretariat should share CPAS data within the broad UN family to inform political decisions at the strategic level, and the broader peacekeeping partnership to assist TCCs and their leadership to improve the quality of their contributions.

20. Utilise digital technologies and data to make peace operations more adaptive. The Secretariat should utilise digital technologies and advanced data tools to provide more regular real-time updates and as a potential predictive tool, and ensure it is effectively staffed with expertise to manage data analytics. This will require a cultural shift towards data-driven approaches.

21. Undertake analysis of the performance of the bodies which deploy peace operations. One of the key factors determining the effectiveness of peace operations is the degree of political will among partners and the UNSC, although this isn’t something peace operations control. The impact of these political processes needs to be better assessed, by researchers and think tanks.

22. Develop tools to assess the whole effort in a conflict-affected country. While there are ongoing processes to examine the role of different peace operations, partners and actors, these are siloed. They are an incomplete picture of overall change and effectiveness for a country and host communities. There is a need for researchers and think tanks to undertake analysis of the whole effort to build and sustain peace in a country, in order to identify lessons.